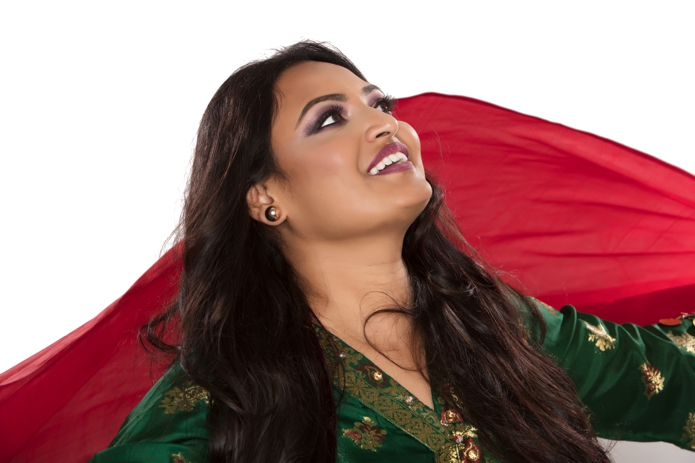 London-based British Pakistani soprano Saira Peter is the world’s first and only “Sufi Opera” singer. Saira is professionally trained in both Western and Pakistani classical voice. Holding Asia’s widest vocal range (4 ½ octaves), she has the rare ability to span diverse genres ranging from Western to Eastern classical and everything in between. She has performed in 13 different languages (English, French, German, Italian, Latin, Urdu, Sindhi, Punjabi, Sairiki, Tamil, Arabic, Swahili, Cantonese) and is devoted to promoting Pakistan’s Sufi values worldwide through her music. (Fanpage: www.facebook.com/sairaptr)

Saira is Director of NJ Arts London, a Pakistani cultural centre opened in 1998 by British megastar Sir Cliff Richard OBE who remained its Patron until 2017. Saira promotes Pakistani culture and, in particular, Sufi values, via her solo concerts, collaborative multicultural events and educational work. She is also on the Board of Directors of Shah Latif Foundation (Bhit Shah). In 2016, Saira became the second person, after Benazir Bhutto, to personally receive the Shah Latif Award from the Shrine Custodian of Bhit Shah in recognition of her ambassadorship, as international scholar and speaker, in globalising Sufi values.

Saira holds an MSc Physical Chemistry (with Distinction), and an MA in History (Islam and the West) (Queen Mary, University of London). Her academic training enables her to grasp a deeper understanding of Sufism and her own multicultural immersive learning enables her to build bridges between erstwhile separated worlds. Saira tours US universities to giving performances and seminars to bring awareness and understanding of Sufi music and poetry.

Saira’s unique vocal abilities have recently been dubbed ‘sufi opera’. It is indeed an apt description of the new genre of energetic music unleashed by this innovative newcomer to the music world. Western and Eastern classical styles and techniques are normally considered mutually exclusive. The vocal skills necessary for the development of one are understood to prevent the development of the other. Yet Saira can sing both with ease – hence “Sufi Opera’. Exactly what kind of music this may be is still in its early developmental phases, but the intended outcome is clear. Saira wants to use her unique fusion of spiritual music to bring together east and west. Committed to promoting peace, respect and mutual understanding, Saira is intent on creating a musical genre that will lift people’s eyes to what is common and transcendent in the spiritual, peace-promoting heritages of both sufi and operatic streams of musical poetry.

INTERNATIONAL MEDIA:  Saira has given exclusive interviews to BBC Radio, GEO TV UK, PTV Global, Dunya TV EUROPE, Sabras Radio and others, as well as media in South Africa, Germany, China and elsewhere. She is the subject of a 30 min documentary on spiritual music by Apex TV. In the UK, Saira has performed live on MA TV, Venus TV, Dunya TV, etc.

Saira has performed around the world, including as soloist at an international peace conference for 5,000 delegates representing 192 nations (Cape Town, South Africa), as well as throughout the UK, USA, Germany, and Switzerland.

She frequently performs with British celebrity artists, a few of which include:

Paul Knight and Jon Ranger have toured with Saira in both the UK and Pakistan.

Strongly supported by Pakistan High Commission London, Saira is often invited to perform at their official functions and was the only artist invited to sing at the historic unveiling of Quaid-e-Azam M.A. Jinnah’s bust (British Museum, London).

A notable recent recording was Saira’s creation of a video performing the British National Anthem by request of British Government offices in Hastings, UK, who use the audio recording for British citizenship ceremonies across the East Sussex region and have permanently placed the video on official social media.